It has certainly been a busy year! Many may remember that our intake total was a record-breaking 652 patients in 2018. But move over, 2018--the VINS Center for Wild Bird Rehabilitation received 705 total patients in 2019.

I attribute our increased numbers primarily to the winter and early spring.  Winter songbirds like the Pine Grosbeak and Bohemian Waxwing were a few notable patients received in the first half of the year. These birds are not often brought to VINS, and the year's scarcity of food in their northern habitats likely forced them to venture to Vermont for more food.

Though winter songbird intakes were a bit more than expected, what really kept us busy was the influx of Barred Owls received in January, February, and March.  We received 77 Barred Owls this past year. To put it into perspective, we only received 44 Barred Owls in 2018.  The weather overall was just too wet and icy for our feathered friends to hunt properly.  Owls can hear their prey under the snow and can usually punch through the snow pack to capture their food. This past winter there was so much ice built up that it made it impossible to break through to the snow for some owls.  As a result, we received many emaciated birds that were struck by vehicles more often because they were more willing to put themselves in harms way to find food.

Listed below are our top 7 patients for the year.  As you can see it was the year of the American Robin! Robins actually made up 32% of the baby birds we dealt with this past summer. Some other well-represented species were Ruby-Throated Hummingbird (13 patients), Red-eyed Vireo (13 patients), Song Sparrow (13 patients), and Hooded Merganser (13 patients).

More noteworthy patients this year included: a group of Mergansers and Wood Ducks that we raised from little hatchlings to full adults; a ruffed grouse chick that came in at just 12 g (less than 1/2 an ounce!) and was released full grown and not imprinted; Belted Kingfisher fledglings that were raised to release; and a fledgling woodcock that was raised to release. I'm especially proud of these cases because these birds require a lot of care, and get stressed in a rehab setting very easily. The fact that we were able to raise to release is a great accomplishment that could not have been possible without the efforts of the CWBR staff this summer. A few rarer patients included a Yellow-billed Cuckoo, 2 fledgling American Bitterns, a monstrously huge Bald Eagle, a Greater Shearwater, and a few Common and Red-throated Loons.

And, let us not forget the new arrivals to our Exhibit and Education teams. In 2019 we added 10 new birds to the VINS family: Paige the Harris's Hawk, Ferrisburgh the American Kestrel, Fairchance and West Virginia our elusive new Eastern Screech Owls, Erie our gorgeous, female Northern Harrier, Addison and Ottercreek our Blue Jays, and Barre, Rutland, and Hanover our exhibit Bohemian Waxwing, Northern Cardinal, and Pine Grosbeak!

Last but not least, CWBR completed a renovation of our entire building this past spring.  Without the extra space the renovation supplied we would not have been able to handle the amount of intakes we received this summer.  Staff and volunteers are so happy to utilize the new space and we are slowly making it homey for staff, volunteers, and birds alike.

Thank you to all VINS staff, volunteers, and members for helping support CWBR this past year.  It really has been a whirlwind and I am excited to see what 2020 brings.

Songbird Diseases & Bird Feeders: What To Look For


by Bren Lundborg Wildlife Keeper Bird feeding is a popular and enjoyable winter pastime for many people, bringing birds in close for easy viewing. While it is widely practiced and can even help biologists monitor populations through programs such as Project FeederWatch (https://feederwatch.org/), there are some potential negative side effects of feeding birds. However, these can be minimized by good feeder cleaning practices and keeping a close eye on the birds at your feeders.

The Importance of Cleaning

There are four avian diseases that tend to be common at bird feeders: Salmonellosis, Avian Pox, Finch Eye Disease, and Trichomoniasis. All can be transmitted by direct contact or by contaminated food or feeders. A major reason these diseases may be more prevalent at feeders is that the close contact between birds gathered at feeders makes transmission easier. If you do see a sick bird, you should remove all food and clean your feeders with a 10% bleach solution. You should also keep your feeders down for at least a week to allow the birds to disperse; remember, birds do not need feeders to survive the winter, so leaving contaminated feeders up actually lessens their chances of surviving. It is also good practice to clean all feeders at least once a week even if you don’t see any sick birds.

What To Look For

The four diseases mentioned above have varying symptoms, but there are some things to keep in mind that may be general indicators of sick birds:

If you do see a sick bird at your feeders, call your local avian rehabilitator or a veterinarian for advice--Do not try to care for it yourself! It is illegal to care for wildlife without a license, and some diseases could potentially be transmitted to people or pets. Additionally, many of these diseases require lab work to diagnose and treat correctly. If it is ill enough that you can walk right up to it, you can gently pick it up with latex gloves or a towel and place it in a box in a warm, dark, quiet place until you can get it to a rehabilitator. It is best to wash your hands after handling a sick bird and avoid bothering it as much as possible, as stress will make illness and injuries worse. If you are unsure whether you should handle a bird, call a rehabilitator or veterinarian first to get advice.


Salmonellosis. Salmonellosis is a disease caused by the Salmonella bacteria, of which there are many species and strains that can cause none to severe illness. It is more common among flocking species such as Goldfinches, Redpolls and Pine Siskins, but any bird can be affected. One study in Norway found that over 60% of dead songbirds found at feeders had died of systemic Salmonella infections. Birds affected by Salmonella may not have obvious signs, but symptoms such as lethargy, a thin or fluffed out appearance, and red swollen eyelids may be seen. Salmonella is mainly transmitted by fecal contamination of food, but it can also be transmitted from direct contact between birds. Salmonella can also be transmitted to people, so wearing gloves and washing hands is strongly recommended for anyone handling a bird with these symptoms.

Avian Pox. Avian pox is caused by several strains of pox virus (unrelated to chickenpox that affects humans) and affects a wide number of species. Most commonly, wart-like growths can be seen on unfeathered parts of the body such as the legs and around the beak and eyes, although it can appear on wings and other areas as well. There is also a more severe form of infection that can affect the oral cavity and respiratory system, causing breathing difficulty and trouble feeding. Although pox infections are often not lethal on their own, difficulty seeing or eating caused by the lesions can lead to death. Pox viruses are transmitted by direct contact or by contact with contaminated food or objects, as well as mosquitoes in the summertime.

House Finch Eye Disease. Originally a disease of domestic poultry, Finch Eye Disease, or Mycoplasmal conjunctivitis, jumped to House Finches back in the 1990’s. It is caused by the bacteria Mycoplasma gallisepticum. While it is most common in House Finches, it affects other species such as Purple Finches, Goldfinches, and several related grosbeak species. Though it has been shown that other species such as Chickadees and Titmice have been exposed to it, so far it does not seem to cause disease in them. Birds affected by Mycoplasma often have red, swollen and crusty or runny eyes. This leads to difficulty finding food and makes them easy targets for predators. Mycoplasma is also spread by direct contact or contaminated objects. For more information on the history of House Finch Eye disease and the role that citizen science can play in monitoring diseases and wildlife health, read this article: https://feederwatch.org/learn/house-finch-eye-disease/.

Trichomoniasis. Trichomoniasis is caused by a single celled parasite Trichomonas gallinae which mainly infects the upper gastrointestinal tract of birds, causing white plaques that can obstruct the throat and trachea. It is very common in doves and pigeons, with many adults carrying the parasite asymptomatically. However, when it is transmitted to other birds via contaminated food or water it can cause more severe disease. Raptors such as Cooper’s Hawks are also often affected after preying upon doves and pigeons; this is more common in urban environments. Birds with trichomoniasis may not have obvious external signs, but are often weak and lethargic from malnutrition. They will sometimes have some discharge around the beak or nares in severe infections. Trichomonas often do not survive long outside the host, but can survive for up to 5 days in moist grain, and up to several hours in water. 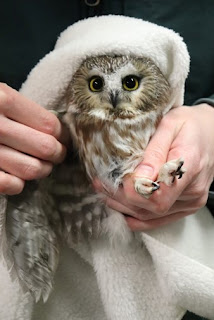